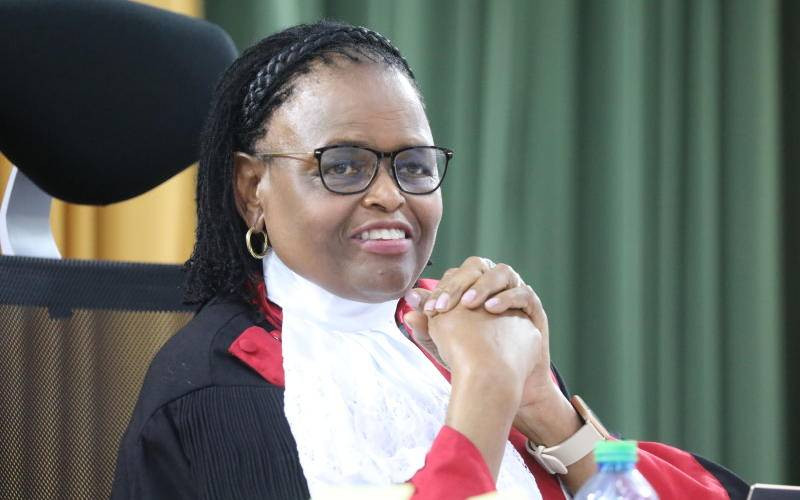 Nairobi; Chief Justice Martha Koome on Friday, November 4, 2022, defended the Supreme Court judges over the use of controversial phrases such as ‘hot air’ ideology in the ruling of President William Ruto’s victory.

Chief Justice explained in detail that the seven (7)-judge bench did not mean or offend the Azimio la Umoja coalition led by ODM party leader Raila Odinga, as well as the coalition’s supporters.

The Queen of the Judiciary simply maintained that the words described the findings arrived at by the seven judges at the Supreme court.

“If you read the judgment properly and followed the reasoning, there is a reasoning for each of those conclusions. Those are purely English terms, perhaps they angered some people, but they were not meant to offend anybody,” CJ Martha Koome said.

“It was just an expression of the finding of the evidence that was presented before the court because, for instance: there were some Form 34As which were brought, relying on the evidence which was hearsay,” she added to her statement.

In addition, Martha Koome also said that the court used an unproven hypothesis, another red herring, and hearsay, as some of the key evidence submitted to the Supreme court was photoshopped.

“For clarity, the court went ahead to ask for the ballot boxes from all the polling stations where the allegations showcased from, whereby there was said to be interference, and citizens of Kenya witnessed the scrutiny which was done on the original forms in the boxes comparing them with original forms that were brought by IEBC, the exercise was only done by not less than 36 hours”, Martha Koome stated.

However, she declined to find more into the court’s findings, arguing that Martha Karua had moved to the East African Court of Justice-EACJ to challenge the ruling.

ODM party kingpin Raila Odinga accused the Supreme Court, making an argument outlining the choice of words did not match the Judicial standards. He further claimed that the Judiciary was under State Capture by the Executive.

On the other hand, the African Union High Representative-AUHR promised to rescue and reform the Judiciary and the Independent Electoral and Boundaries Commission-IEBC.

“We are filing this reference not only to enable the truth to come to light but also to secure guarantees of the non-recurrence of failures in this sensitive area of elections in the future’’ Martha Karua said in a statement.

“We took our dispute to the Supreme Court, hoping for a fair hearing. However, it undermined the rule of law by violating the right to a fair trial,” court documents state.