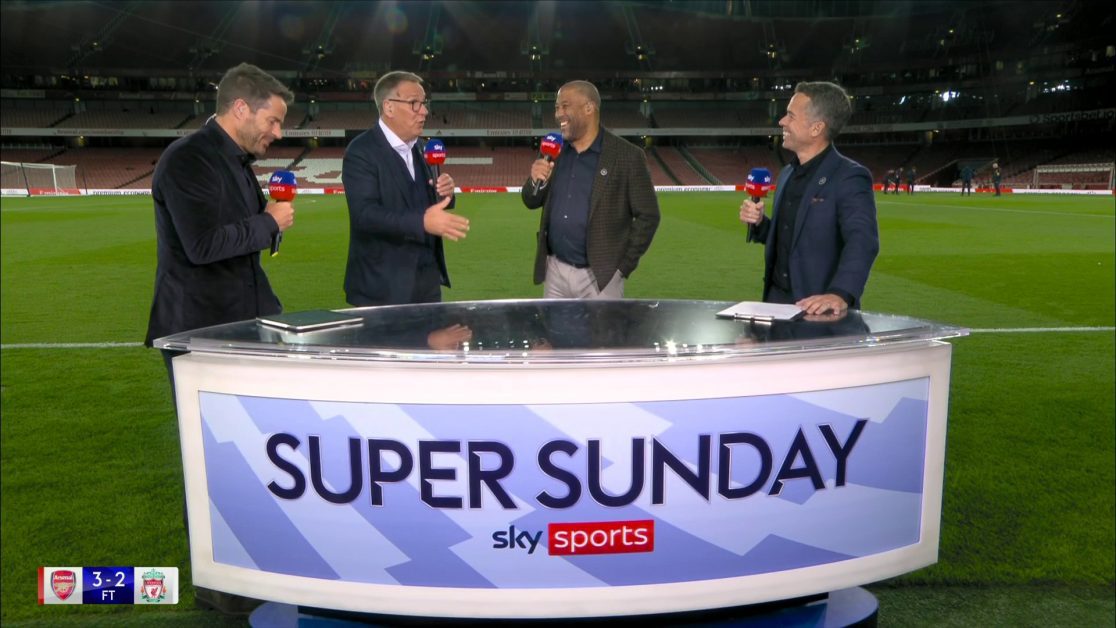 Arsenal remains top of the Premier League following a 3-2 win over Liverpool at the Emirates Stadium on Sunday but a penalty in the second half caused a talking point.

Liverpool midfielder Thiago brought Arsenal striker Gabriel Jesus down inside the visitors’ area to concede a penalty in the second half.

The Gunners raced into the lead at the Emirates Stadium on Sunday courtesy of a fine Gabriel Martinelli finish but Liverpool recovered after their slow start to equalize through Darwin Nunez in the 34th minute.

Arsenal regained the lead during first-half stoppage time when Bukayo Saka stabbed the ball home from close range only for Roberto Firmino to level things at 2-2 soon after the restart.

There was, though, more late drama when Arsenal was awarded a penalty in the 76th minute after Thiago Alcantara brought Gabriel Jesus down inside the visitors’ area after knocking the back of the striker’s heel when challenging for a cross.

As tempers flared on the field, Oliver’s decision to award the penalty was upheld by VAR, and Saka slotted home the spot-kick.

The decision to award the penalty was a major talking point after the game, and Sky Sports pundits Jamie Redknapp, Paul Merson, and John Barnes all had their say on the matter.

“I think it’s a soft penalty, we can agree on that but how Liverpool defended there, Fabinho he’s on the floor, there was no urgency and I think that goal sums up where Liverpool are as a unit,”

“No one’s taking responsibility, no one pressing, no one trying to win tackles. Fabinho falls over and he might have had a knock, he’s normally a defensive midfield player, if you compare that to Thomas Party today who was alive to every situation, nobody is doing their job.” Redknapp said.

“I would say softly. I called it straight away, he has kicked the back of his foot, if you do that I’d call it a penalty. I’d call it a home penalty but with VAR it doesn’t matter. The lad [Saka] is a tremendous player and shows a lot of bottles, it took a long time, it was about two minutes before the penalty was taken as well.” Merson said

“Thiago tries to control the ball, but it goes wrong, when the ball goes out wide and comes to Gabriel Jesus, he does get the ball and Thiago does kick him but I don’t think the kick is enough to go down. There is contact but him going down without being able to get a shot off or the kick making him go down, I think it’s a soft penalty.”

After the game, which leaves Arsenal top of the Premier League and Liverpool in tenth, Reds boss Klopp had a lot to say about the decision to award the Gunners a penalty.

The German said:
“What can I say now about that situation? He [Michael Oliver] thought immediately it was a penalty which is interesting but his decision.

“Mr [Darren] England had a look at it and thought as well it’s a penalty. We know in life if two refs think the same that is the truth we have to live with.

“If I see the situation back, if there was contact and I’m not sure there was, there might have been soft contact, then the player goes again on both feet and then down, that’s an indication that something might have been made up. But not for the refs.

“But they thought it was a clear not handball in the first half when Diogo put the ball on Gabriel’s arm, and we cannot change that.

“Our situation is difficult enough with injuries on top of that, but in a game like this, when decisions go against you it’s kind of typical but it doesn’t help. Now we have lost the game.”

The handball Klopp is referring to was labeled ‘baffling’ by many fans on social media. Gabriel Magalhaes, who was near Diogo Jota, was seen handling the ball inside his penalty area following a Jota cross, but both Oliver and the VAR officials, Darren England and Edward Stuart decided against awarding a penalty.