Bill Gates Endorses the Use of GMO to counter Famine Bill Gates while addressing students at the University of Nairobi, on Thursday November 17, confirmed the effectiveness of GMO Crops, saying they are safe for consumption, as himself use most GMO products.

The Bill & Melinda Gates foundation Co-founder expressed his disappointment with those who are anti-GMO food crops, saying that Genetically Modified Organism food crops are perfectly healthy.

He insisted that GMO crops are rather a viable tool in reducing the ongoing hunger that has caused devastation around the world and in Kenya particularly.

“GMO foods are perfectly healthy and the technique can reduce starvation and malnutrition when it is reviewed in the right way,” Gates wrote. “I don’t stay away from non-GMO foods but it is disappointing that people view it as better.” Bill Gates noted.

The topic has rather been received with controversies as some people believe Genetically Modified Crops are a threat to a healthy life.

Companies that certify Non-GMO Crops have recently recorded over 40,000 entries by food manufacturing companies, witnessing a surge in sales making up to $22 Billion in Yearly Sales.

However, Gates still maintains his stance that aligns with that of the National Academy of Sciences, The American Association of Advancement of Science, and the European Commission, which are confidently endorsing the use of Modified food.

Gates’s sentiments are reiterated by the research study published in 2013, revealing that GMO crops are healthy for consumption and contain no hazards that can pose a threat to human health.

Bill also added that nearly every food we eat today is genetically modified over many years to achieve desirable traits like large amounts of Sweet, small seeds and edible flesh.

Bill further gave examples of life-saving products that have been made with Genetically modified ingredients, like Insulin, prescribed to Diabetic patients, to aid in Sugar level regulation.

He gave another example with cotton, which is a raw product for making clothing, saying the cotton used has overtime been genetically modified over time to achieve the best trait. 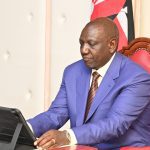