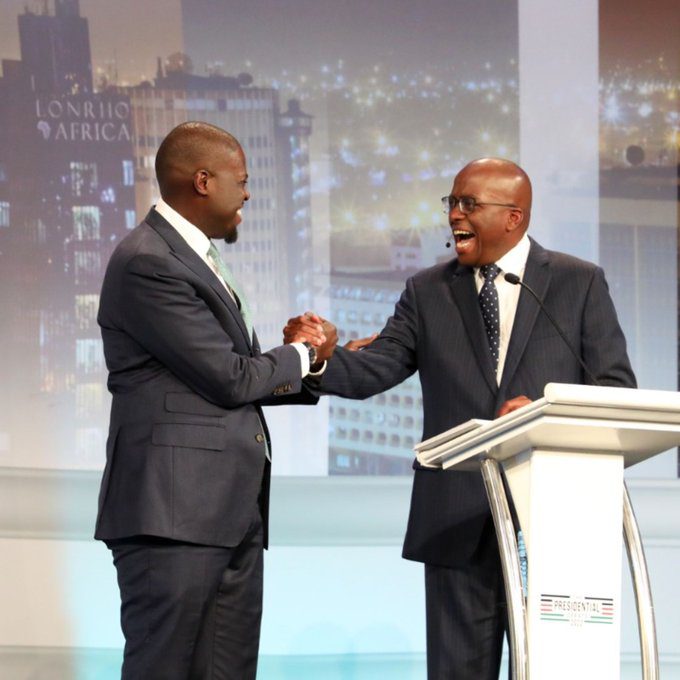 The organised debates had the Nairobi Gubernatorial Debate was full of heat as the Azimio aspirant Polycarp Igathe rammed head-on in words with UDA aspirant Johnson Sakaja.

The duo challenged each other’s comprehension of the needs that the people of Nairobi yearn for.

Even though Mr. Sakaja arrived at the scene a bit late, it seems he was well equipped with an understanding of the issues that need to be dealt with for a dignified Nairobi for Nairobians.

Regarding water challenges experienced in the capital, Sakaja believes that bridging the gap in the delivery of clean water will be important to Nairobi citizens.

“Nairobi has four water sources; Kikuyu springs set up in 1907 providing 1%, second is the Tururu dam of 1936 providing 4%, the Sasumwa dam provided 11% of water, and Ndakaini provides 84% of the water used in Nairobi. Every day people of Nairobi need 850 million liters of water while they have been getting only 526.5 liters of water per day,” added Sakaja.

On his part, Polycarp Igathe mentions that the Ruiru dam and Ndakaini dam are the providers of water in Nairobi and he says that dams and new water sources will have to be developed including piping of the water and repurposing of wastewater to meet the demand.

The second issue is on the governance and the set-up of the Nairobi Metropolitan Services, an issue Igathe says, “Has played a big role by sinking boreholes, especially during the covid era. It’s part of the military to do civilian duty and they have played a big part hence they shouldn’t be vilified.”

According to Sakaja, the Nairobi Metropolitan Services (NMS) would not have been in place in the first place if Deputy Governor Igathe should have stepped up.

In a scathing attack, Sakaja added that the NMS played Igathe’s role.

“The boreholes and provision of security for Nairobians would have been deployed and ensured by you yet didn’t since you ran away from duty when duty called.”

On the issues regarding garbage, Sakaja believes that accountability has to be delivered by the people that are areas accounted for by the area appointed staff not a garbage team for the whole county which has made it a challenge.

An issue Polycarp Igathe says can be solved once a county government there is the deployment of resources to set up an incinerator that will burn all the garbage collected within the county of Nairobi ensuring cleanliness.

Regarding the collection of taxes and managing the debt of Nairobi County, Igathe believes digitizing the tax collection and finance system will assist control the money losses which can then be essential in the building of infrastructure for the people.

Mr. Sakaja insisted that NMS has not been successful enough due to a reduction in the taxes collected to 7 billion which can be cited to the harassing of business dealers.

He further urged for a need to involve the people and ensure they know what the money being collected is used for, avoiding harassment of business people will enable them to be productive which ensures growth businesswise, service delivery, and the economy generally.