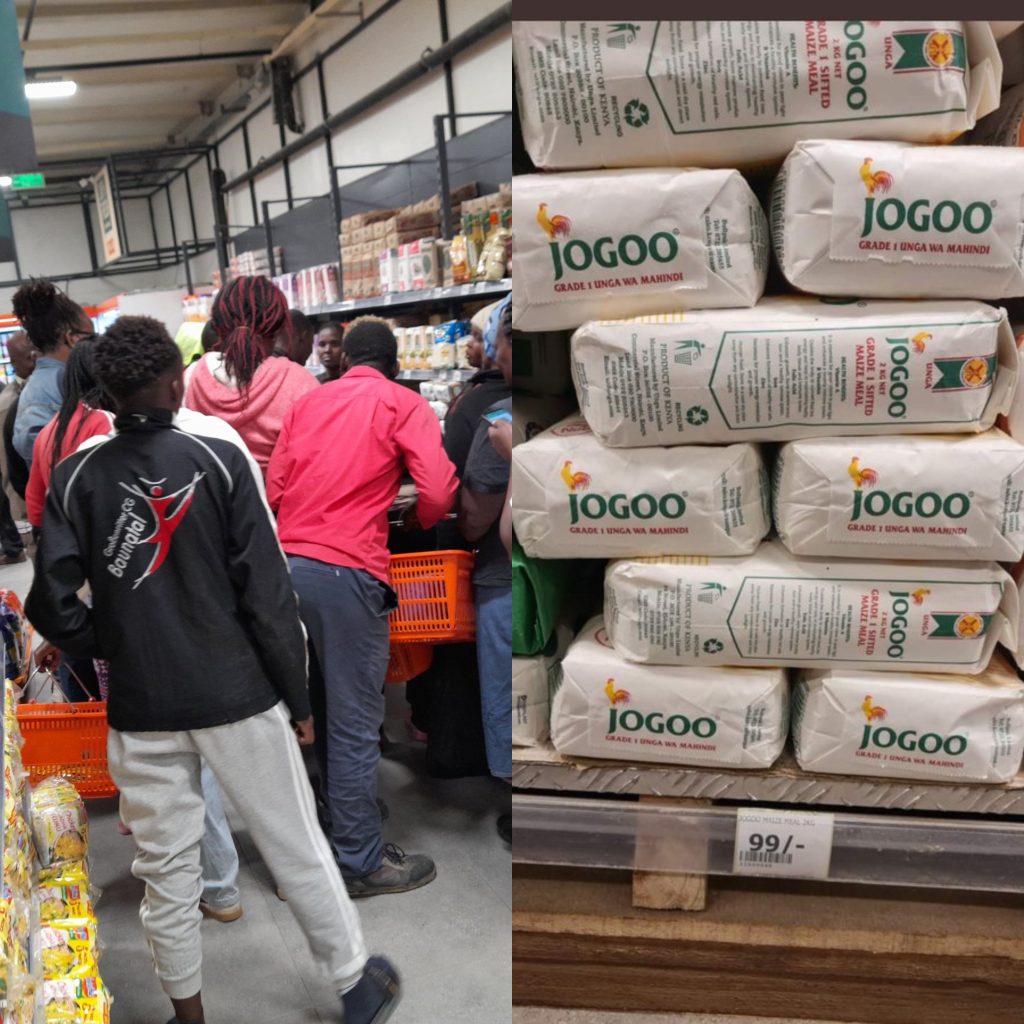 Customers have raided Naivas after President Uhuru Kenyatta earlier this week saw Maize flour prices reduced from a retailing price of Ksh 230 to an affordable price of Ksh 100 for a 2kg maize flour.

This morning, Naivas supermarket received citizens in the hundreds as they flocked in queues seeking to buy the maize flour after its announcement of the reduction.

Buyers were scrambling to stand in long queues, each struggling to take as many packets as they could of the commodity.

Most of the maize flour brands had their stands emptied as the demand saw a surge, while for others only a few packets remained available forcing Naivas supermarket to regulate the number of maize flour purchasable.

As of Thursday morning, at Naivas supermarkets in Nairobi, a 2kg maize flour morning retailed at Sh100 but at Carrefour, it was retailing at Sh197, and at Quick Mart Supermarket, the prices ranged between Sh210 and Sh230 depending on the brand.

Apparently, some of the retail shops and outlets still sell at the rates they were before despite the president’s directive.

A subsidy that followed a deal brokered between the government and maize millers registered with the Agricultural food authority after days of consultations.

“This Programme of a subsidy of approximately Sh105 per 2kg pack of maize meal is meant to lower the cost of living for vulnerable households as we look for a sustainable solution to the recurrent rising prices of UNGA every election,” President Uhuru said.

Switch previously reported how Kenya Kwanza asked Kiambu voters to vote for their presidential candidate William Ruto, as they claimed he has a solid plan to subsidize the toll of Unga, cooking oil, and soap, whose costs were now unbearable to a large majority of Kenyans.

Rallying in Limuru, Kiambu County on Friday, July 15, the faction accused the ‘handshake government’ to have prompted the country into an economic depression.

Ruto further said that Azimio La Umoja was working to satisfy their interests and was not focused on leveraging the country’s economy.

“Raila has caused an upsurge in the cost of products. Currently, we are encountering a huge rise in the cost of Unga, cooking oil, salt, and soap among other products. This will come to an end once we elect our chief hustler William Ruto as our next president,” Rigathi Gachagua said.

The deputy president who was the rally moderator fired the Azimio La Umoja presidential candidate Raila Odinga accusing him of intervening in the IEBC legal frameworks instead concentrating on his political bid.